Jeannine:  Before we get started with more detailed questions, would you please introduce yourself to our readers.  What is your background?  What drew you to composition?  To the organ?

Mr. Cooman:  I was raised in Rochester, New York, and began piano lessons at a young age (3). Around age 10, I started to develop an interest in composing music. I had become interested in the organ simply as a listener from attending church and then by acting as page turner to our church’s organist.

study the organ formally. By the end of high school, it was clear to me that I wanted to be a professional musician, and that composition would be the major parts of my life. I went to college (Harvard University) and graduate school (Carnegie Mellon University) in music composition. All during this time, I was also active as an organist, specializing in contemporary music, which has remained my focus to this day. After graduate school, I moved back to Cambridge, Massachusetts to become Composer in Residence for The Memorial Church at Harvard University.

Jeannine:  You certainly have an amazing multi-faceted music career with your extensive work as a composer, a writer, an editor, and a concert organist.  Let’s look first at your work as an American composer – a composer with a catalog of hundreds of works in many forms – from solo instrumental pieces to operas, and from orchestral works to hymn tunes.  Your music has been described as “a vivid combination of inspired mellifluousness, emotional excitement, and creative expressiveness.”  How would you define your music?   What is it in the music that causes a reviewer to use these boldly descriptive words?

Mr. Cooman:  Describing music in words (whether being done by the composer themselves or somebody else) is not necessarily an easy or clear task. I have written a fairly large number of pieces in a variety of genres, and so there is certainly variety of both purpose and content across the music I have written. The facets of expression certainly with the piece. The kind of piece one might write for an amateur church choir is not the same sort of piece one would write for a university new music ensemble.

My music is certainly connected to the historical tradition, though it seeks also to speak with a contemporary voice of today, and I would say also with an “American” one as well. What I strive for in my own music are also the things I look for in the work of others, regardless of style. I am most attracted to music that is deeply communicative and totally direct in its presentation, with no unnecessary artifice. I dislike so much organ music that is just tied up in knots of organ obfuscation or pieces that seem little more than transcribed improvisation. I want music where every note matters. The organ as instrument must be in service to the music.

The most crucially important thing for me is to bear in mind how the music sounds in time: the actual experience of listening to the work. This sounds simplistic and obvious, but it's amazing how often this is forgotten. Since composing is a slower process than listening, it's very easy for a composer to get caught up in systems and ideas that are

compelling only in the abstract. Unlike visual art, music is a "time" art form. Everybody is forced to experience it at the same rate. If somebody doesn't like your painting in a gallery, they can just walk away after a few seconds (or conversely, stare at it for hours). But when a listener is hearing a musical performance, they have no control over what happens. I consider that a hugely significant mandate that a composer is given: the responsibility for the use of other people's time. And thus, every moment must matter and have purpose.

I have written in all active classical musical genres (except ballet), although since this is an organ-centric newsletter, it probably makes the most sense to focus on those works. I do have many compositions for the 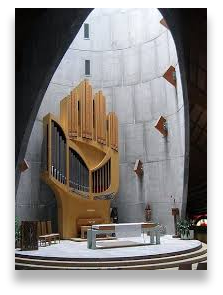 organ of almost every sort and difficulty: both for use in service and in recitals. I always strive in my organ music to make it no harder than it needs to be to get the effect across, and the ongoing positive reaction from performers seems to confirm to me that this is valued.

The organist Erik Simmons is gradually recording my complete organ works in a CD series for Divine Art Records (divineartrecords.com). As of Spring 2018, seven volumes have been released, with more in preparation.

On my website (carsoncooman.com) one can view a list of all organ works as well as information about where they are published.

Jeannine:  You are the Composer in Residence at The Memorial Church, Harvard University.  What does this position entail?

Mr. Cooman:  I compose works for the church’s and university’s musical ensembles, advise on new music-related repertoire, act as the liaison for projects where outside living composers are involved, and work with my conductor and organist colleagues in the running of the university church’s extensive music program. I do also play some services as organist since we have many (including a daily service that dates back to the university’s founding).

Jeannine:  Since early 2015, you have been the organ editor for the Lorenz Publishing Company.  Can you give us an insight into your role as editor of the three Lorenz organ magazines/periodicals -- (The Organist, The Organ Portfolio, and The Sacred Organ Journal)?  How is music chosen?  What is the criteria for inclusion?

Mr. Cooman:  I have worked in music publishing since 2000, initially directing publications for Zimbel Press and in a freelance advisory capacity for a number of publishers. In 2015, I was very pleased to join the staff at the Lorenz Corporation to direct the Lorenz Publishing and

Sacred Music Press organ catalogs, organize our Sacred Music Press choral imprint, and edit our long-running organ periodicals. It has been a pleasure to work for a company that is so supportive of the breadth of contemporary church music that I am interested in myself. We strive to have organ and choral publications that cover whole gamut in every respect: difficulty level, purposes, denomination/worship style, and musical style. I thus aim in the organ catalog for a great variety of material and creative expression across the works and composers whose we publish.

The primary use of much of the music published is church service playing (and singing), and so a large degree of practicality, accessibility, and general usefulness is important. Personally, I am always most interested in music where the composer’s individual voice is allowed to flourish, rather than being edited into a homogenous “commercial” style. Thus across the publications for which I am responsible (including the organ periodicals), I seek to showcase a variety of distinct musical voices who are writing compelling music each in their own way. It would be impossible to have each piece be everybody’s personal favorite, given the wide variety of tastes, abilities, and interests. So I strive for a variety with the belief that everybody will be able to find things within the catalog that are especially appealing to them.

Jeannine:  Your work as a concert organist has taken you in a unique direction – that of specializing primarily in new music and often performing programs that include a world premiere.  Why is this type of program important?  How do audiences react to such concerts?

Mr. Cooman:  I have been interested in contemporary music from the very beginning of my organ performing life. I focus on this repertoire because this is the world that I as a composer live in most often and because working with new works by living composers in a wide variety of styles is what excites me the most. I also have little interest in

duplicating the repertoire and programming that so many other concert organists play. I want to offer something different, and thus I have continued to focus exclusively on recitals of contemporary music. Even though the music all comes from the 20th and 21st centuries, the styles vary considerably, so the programs are balanced and varied much in the way that many organ recitals are (or should be). We live in a period where the diversity of styles being employed by composers is truly enormous: everything from historical style pastiche through the most avant-garde forms of expressions. Most of the repertoire I play lives between those two extremes, in which there is a wide variety of styles possible.

In 2012, I also started more actively recording contemporary works by a wide variety of composers, initially focusing especially on practical pieces that I thought many organists could actually use themselves, rather than exclusively big “recital” repertoire. As of early 2018, I’ve recorded and posted (on YouTube) recording of more than 1,700 contemporary works for organ.

Jeannine:  You also have a keen interest in music for chamber organs.  First, please tell our readers something about chamber organs and why/what you are doing to develop repertoire for small organs.

Mr. Cooman:  In the USA, the baroque “revival” and historically informed performance movement of the last number of decades have seen an increase in the availability of chamber organs. Many churches, universities, and ensembles now either own them or rent them routinely. 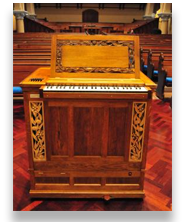 However, at least in the USA, these lovely small instruments tend only to be used for playing continuo parts in baroque music. (Europe has had and still retains a greater tradition of using chamber organs for a wide variety of purposes.) I feel it is a missed opportunity not to explore what is possible with solo music for these instruments. Often an intimacy and special character is possible in a way that might not be as easily achievable on the “large” organs.

So I have commissioned works and encouraged the creation of new pieces that are suitable for performance on chamber organs. While many pieces from the baroque and pre-baroque eras can, of course, be played very effectively on these instruments, and while there have been other pockets in organ music history with attention to repertoire for small organs (such as the many harmonium/choir organ pieces by French composers in the early 20th century), few composers today were producing much music for them.