Celebrating the 500th Anniversary of the Reformation

Five years ago, David and I arrived in Lutherstadt Wittenberg,

Germany on a summer’s afternoon to start the preparations for the two organ concerts I would play and the recording we would make.  Meeting the sexton of the Schlosskirche (Castle Church), we were handed a huge skeleton key to none other than THE door where Martin Luther nailed his 95 theses those many centuries ago.  Our personal participation in the Luther Decade celebration commemorating the 500th anniversary of the Reformation had begun. 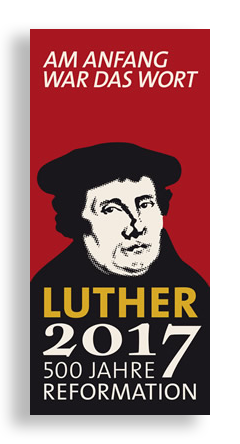 The Luther Decade from 2008 to 2017 invited the world to take part in various events to search for traces of the original scenes of the Reformation.  The decade commemorated the 500th anniversary of the nailing of the theses, with which Luther set the Reformation in motion in Wittenberg on 31 October 1517.  Exhibitions, concerts, church services, festivals and theatre productions were a highlight of the importance of the Reformation and the role Martin Luther played in the places he lived and worked.

During the Luther decade, topics of the Reformation were developed in special theme years.  In 2012 the theme was The 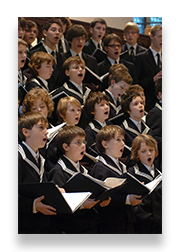 Reformation and Music.The Reformation laid the foundations for European music culture – from congregational singing to music in the home. This was demonstrated by composers such as Bach, Schütz, Telemann and Händel, and also the Leipzig Thomanerchor (St. Thomas Choir) which celebrated its 800th anniversary in 2012.  This celebratory year stressed how important it is to keep this rich musical tradition alive and to also explore new avenues. 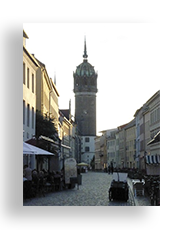 As part of this year-long celebration of The Reformation and Music, I was invited to perform an organ concert at each of the historic churches of the city:  the Schlosskirche (Castle Church) with the famed inscription encircling its tower, “Ein Feste Burg ist unser Gott” (A Mighty Fortress is Our God); and the Stadtkirche (Town and Parish Church).

The adventure began when I accepted this invitation to “become part of the Reformation celebration”.  With Martin Luther obviously at the forefront of the celebration, I decided to perform two different programs created entirely of organ compositions based on the hymns of Martin Luther.   Discovering a plethora of hymn tunes and texts by Luther, I set out to find creative and engaging organ settings of each.  Exploring stacks of music, I finally narrowed the search to thirteen pieces by composers as varied as Samuel Scheidt and Johann Sebastian Bach to Jan Bender and Wilbur Held.  These pieces formed the basis of the two concerts I performed and the CD we were to record in these historic churches on the Ladegast and Sauer organs, two magnificent instruments.

Research and practice complete, David and I left for Germany 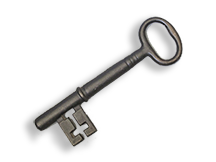 expecting incredible experiences, but we were met with even more than we anticipated.  Once handed that heavy key to the door of the Schlosskirche, our adventure into the world of Martin Luther had begun.

Not only did we hold that key in our hands, but once we pulled open the weighty and magnificent bronze doors inscribed with those 95 theses late that summer evening, we were standing alone in Luther’s Schlosskirche.  No tourists, no noise, just one dim light bulb shedding light into an awesome space.  What a gift we

organists are given – time alone (albeit sometimes in the wee hours of the morning) to play magnificent organs with their sound reverberating through space and touching every stone; time alone to imagine what life and worship would have been like without the tumult, noise, and commotion of our everyday existence; time to meet God in the absolute stillness of a sacred space.   We spent several nights practicing, listening, recording, and absorbing the splendor of that celebrated space.

During the daylight hours, I played my concerts to two gratifyingly receptive audiences of tourists and local residents.  One local man, a sexton at the Stadtkirche, grew misty-eyed as he related how 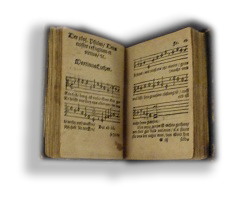 touched he was to hear the beloved chorales of Martin Luther that he grew up singing, played in my organ concert at his church.

We walked the same mile Luther walked between the Schlosskirche and his home trying to imagine the thoughts occupying Luther’s mind as made his way down a street filled with people purchasing indulgences.

We stayed in a residence across the courtyard from the Black Monastery, the Luther family home. In that courtyard, as I stood next to the tiny but life-sized bronze statue of Katherina von Bora (Luther’s wife), her limitless energy working with and for her beloved husband seeped down through the centuries.

We hurried to the Stadtkirche, along with others, including a little

boy who voiced his concern at the lateness of the hour by repeating “Dongen, dongen!” (bells, bells) to his mother, as the bells of the Stadtkirche called us to the Sunday service.  Had Luther and Katharina hurried their family to the Stadtkirche to sing hymns in German, to take communion, and to hear Luther preach?

We shared ideas with musicians (Sarah and Thomas Herzer of the Schlosskirche and Heike Mross-Lamberti of the Stadtkirche) influenced by Martin Luther.  Musicians who are committed to keeping the tradition of congregational singing and excellence in worship music alive while exploring new music avenues as well.

We recorded a CD of a group of organ pieces influenced by this reformer, this musician, this family man, this Luther in the serenity and beauty of the Schlosskirche and the Stadtkirche.  Hour after hour, night after night.  Inspired and hoping the the week would never end.  The result?  The CD, The Chorales of Martin Luther.

Eventually we had to return the key to that door that changed the world.  Eventually we had to return to our lives in Lincoln City, Oregon, but not before we had experienced the 500th anniversary of the Reformation in a deeply personal and moving manner.  The memory of that week-long experience in Lutherstadt Wittenberg with the echo of Luther everywhere will remain with us always.

Our CD, The Chorales of Martin Luther Played on the Stadtkirche and Schlosskirche Organs in Lutherstadt Wittenberg, Germany celebrating Martin Luther and the 500th Anniversary of the Reformation is available by request.  Please contact me at jeannine@promotionmusic.org for information.