Jeannine:  Born in Beirut , Lebanon in 1955, how did you find your way to the organ world and eventually to Paris and the studio of Jean Langlais and the Conservatoire National Supérieur de Musique de Paris?

Dr. Hakim:  I grew up in a family of music lovers. My father, Subhy, 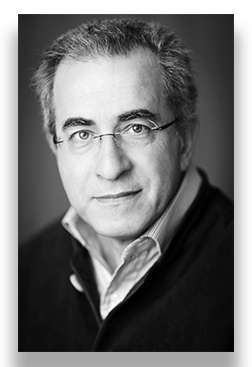 played the mandolin and still sings at 93. My mother, Katy, still plays the piano by ear. My brothers, Amine and Nadey, my sister Nada and I studied piano and several instruments including trumpet (Amine), Clarinet (Nadey), Guitar (Nada) and myself cello. However my entering at the Chapel of the Collège du Sacré-Coeur in Beirut changed my life as I discovered there the magic sound of a French Romantic Debierre-Gloton organ, in the tradition of Cavaillé-Coll. Love at first hear! With a strong determination I studied organ alone and gave my first concert in this very Chapel at 15 years old, including a.o. Bach’s Toccata and Fugue in D minor, Franck’s Prelude, Fugue et Variation, Vierne’s Etoile du Soir, Boëllmann’s Toccata. A year later I played Dupré’s Prelude and Fugue in G minor and Franck’s Choral in E. At 16 I entered an engineering school in Beirut Ecole Supérieur d’Ingénieurs de Beyrouth, as my father wanted me to secure my living in Lebanon, where a musical carreer would have been too risky. In 1975 the evil destroyers elected Lebanon for a 25 years of civil war. As I had to finish my engineering studies I went to Paris and took that opportunity to try to get to the Conservatoire National Supérieur de Paris. The concours d’entrée included the performance of a Prelude and Fugue from the WTC by Bach on the piano, two contrasted organ pieces (I chose Franck’s Cantabile and Bach’s Prelude in B minor) and an imposed piece (Vierne’s Feux follets).  I got 3 out of 7 votes and wasn’t admitted in 1976. I sobbed all night! Soon the Ste Odile organist Françoise Rieunier, recommended me to take lessons 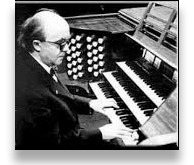 with Jean Langlais. At the end of the first lesson Langlais said : “I have been teaching for 42 years. It is the first time I have a student such as you. You will make a great carreer.” As he spoke as a prophet (and he was), he gained my full confidence. I respected and loved him like a second father. A year later I entered the organ class of Rolande Falcinelli at the Conservatoire. Maître Jean Langlais, unparalleled pedagogue, encouraged me and my wife, Marie-Bernadette Dufourcet during all of our studies at the Conservatoire de Paris, our international organ competitions until we got our respective positions  of Organiste Titulaire du Grand-Orgue de la Basilique du Sacré-Coeur and église Notre-Dame-des-Champs de Paris.

Jeannine:  You are the recipient of numerous awards and prizes in performance and composition including The Augustae crucis insigne pro 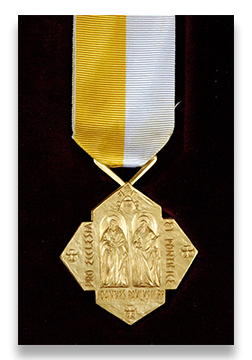 Ecclesia et Pontifice awarded by His Holiness Pope Benediktus XVI for your excellent commitment and work for the benefit of the Church and the Holy Father.  Please tell us of the work in the Church that led to this high honor.

Dr. Hakim:  Prior to this distinction I was nominated member of the Consociatio Internationalis Musicae Sacrae and took part in several symposium on church music, and received a Doctorate honoris causa from the Pontifical University of the Holy Spirit, Kaslik, Lebanon. My work in the Church was testified by Reverend Father Louis Hage, President of the Consociatio Internationalis Musicae Sacrae, who visited me several times at la Trinité church, followed my publications, recordings, invited me to make an improvisation CD on Chants Maronites (published by IFO, Germany) and take part in the Canonisation in Rome of Lebanese saints Rafka and Hardini. All these events culminated in my papal distinction.

Jeannine:  Your compositional output ranges from pieces for organ solo to congregational songs.   What is the impetus for your compositions?

Dr. Hakim:  The impetus stems from one verse from the Credo : “Et incarnatus est!”, never ending “Et incarnatus est!” Word made flesh in us in our Life, Joys, Sufferings, Death and Resurrection. All my works, whether organ solo, chamber, vocal or orchestral, radiate from this belief. 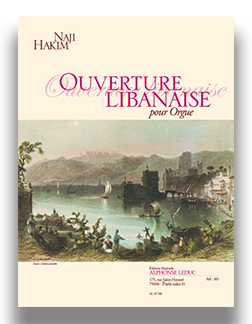 Jeannine:  Having recently begun studying the organ setting of your OUVERTURE LIBANAISE, I am particularly intrigued by your compositions for the organ based on nationalistic melodies and Mid-Eastern scales and rhythms.  What can you share for those of us exploring your organ repertoire to assist us in understanding and performing your music?

Dr. Hakim:   He poured himself out, dew and bracing rain,
Upon Mary, that earth thirsting for Him.
Grain of wheat, he descended into earth;
He rose again from it sheaf and new Bread.

Saint Ephrem, Sermon for the 3rd Sunday after Epiphany

Patriotic, nationalistic, flows, derives from the word “earth” in Saint Ephrem’s quotation above.

More technically here are the sources of my Ouverture Libanaise. I have quoted/developped melodies memorized since my early childhood in Lebanon. Please find hereunder youtube links to these melodies : 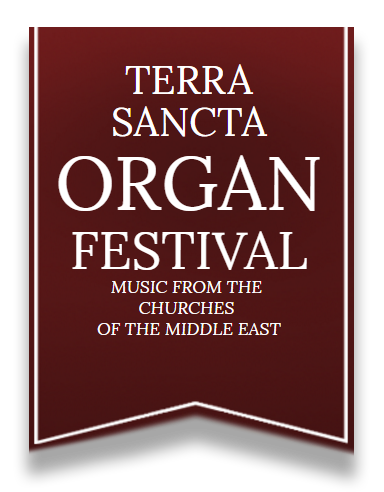 Liban (Lebanese Pipe Organ Week) promote the organ in the Mid-East.  What is your involvement in these festivals and how are they important in the organ world?

Dr. Hakim:  These festivals were a point de depart for the restoration of several organs, including the restoration by Saverio Tamburini of the organ of the chapel of Collège du Sacré-Coeur in Beirut which I inaugurated last year. A day later, I offered another concert on the Rieger organ of the Evangelical Church of Beirut, with my own works for violin and violin, clarinet, horn, oboe, fagot and percussion.

This year my wife was invited at college du Sacré-Coeur and the choir of the Notre-Dame University, Louaizé, Lebanon, invited me to conduct my Gloria for choir and organ at same concert.

The Lebanese public has been deprived of musical life during the war; now is a time for a revival of cultural and artistic life. These festivals and others, such as the Beirut Chants Festival or the Baalbeck Festival are excellent opportunities to offer joy and elevation to the souls.

Jeannine:  What are your current projects?

Dr. Hakim:  I will premiere my Variationen über “Ein Haus voll Glorie schauet” for organ at St Nikolaus Church Frankfurt on 26 March.  Having composed a Diptyque for txistu (Basque flute) and piano and a Concerto for txistu and orchestra (the latter to be premiered this year or in 2018), I have been interested in the existing repertoire for txistu. So I am finishing now a Basque Anthology, arrangements for txistu (basque flute)/recorder/flute and keyboard (piano/harpsichord/organ) of compositions by Basque composers. It is in preparation at United Music Publishing, England. 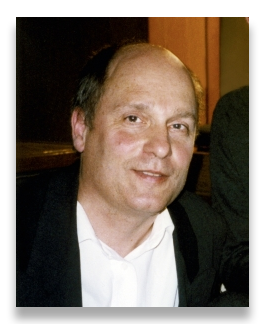 Right now I am writing a suite for 3 trumpets, timpani and organ which I will premiere in August in Ingolstadt Dom, Germany. Dr Franz Hauk, Director of Music at Ingolstadt Dom has prompted several commissions to me, including my Pange lingua, Ouverture Libanaise, Aalaiki’ssalaam, Salve Regina, Variationen über “Wie schön leuchtet der Morgenstern” for oboe and organ, and Suite Française and now this upcoming suite!

Jeannine:  Where can one find your music? 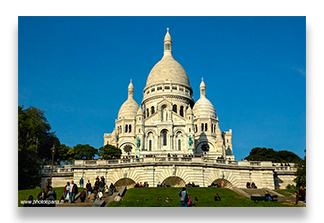 Dr. Hakim:  I was appointed organist at the Basilique du Sacré-Coeur in 1985 by the First Chapelain Father François de Vorges. A few months after my appointment, after an evening mass, the old Rector Monseigneur Maxime Charles asked to meet me in presence of the Maître de Chapelle. He said : “Monsieur Hakim, je tenais à faire votre connaissance avant de partir de cette basilique où j’ai été recteur pendant plus de 50 ans. Vous êtes exactement l’organiste qu’il faut pour cette basilique. Ne changez rien à ce que vous faites, ni plus ni moins! J’espère que vous resterez plus longtemps que moi ici. Et dorénavant il faudra vous appeler “Maître”. Au revoir Maestro!”  “Mister Hakim, I wanted to meet you before leaving this basilica where I have been rector for more than 50 years. You are exactly the organist we need for this basilica. Don’t change anything in what you do, no more, no less! I hope you will stay here more than myself. And from now on we must call you “Maître”. Good bye Maestro!”
It was the first and last time I met him in person. I played for several of his services before he retired. When he passed away (I had already left the Basilique to be organist at La Trinité), Rector Alain Hazemann called me and insisted that I play for his funeral, which I did.

Many people think I left Sacré-Coeur to succeed Messiaen at La Trinité. 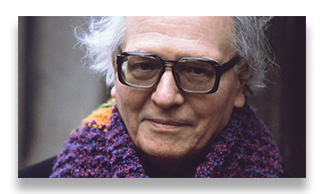 The true reason is that Rector Hazemann didn’t want to amend my contract – my family needed my presence more. I buried my heart at the Basilique du Sacré-Coeur and regret its organ and liturgy as a part of my body and soul. Both organ and music at the Basilique du Sacré-Coeur are a very important source of inspiration to my music as for example the first movement of my Seattle Concerto for organ and orchestra, the second movement of my Sonata for trumpet and organ, or my Hommage à Igor Stravinsky for organ.

You may be interested to read an excellent article on my organ music/Lebanese influences in German by Dr Crista Miller ORGAN magazine December 2015 Schott Music, or Biography of Naji Hakim by Zeina Saleh Kayali, in French : http://www.geuthner.com/livre/figures-musicales-du-liban-naji-hakim/1107

“The melody, always the melody,
that is the only and unique secret of our art.” Charles Gounod

“Music is the Word of the unspeakable!” Naji Hakim