Please introduce yourself to our readers. What is your music/organ background?  Are other family members organists/musicians as well?

Actually, the organist and AGO member in the family is Peter, age 8. I’m just a mom trying to support their child’s interest. We found an amazing, inspiring program in the Netherlands and figured out a way to bring it to the States. As a stay at home mom, complete with PhD, I had some time and some skills to contribute to this effort.

My PhD is in frogs… amphibian population declines, specifically, but from working in the field of Conservation Biology, I know that to conserve, preserve, or protect something, a resource, you’ve got to make the public care about it. And that’s the motivation underlying Orgelkids. In fact, Orgelkids USA’s motto is very much derived from a famous quote in Conservation Biology, "In the end, we will conserve only what we love, we will love only what we understand, and we will understand only what we are taught." Baba Dioum, 1968

“To ensure a vibrant future for the pipe organ, we should capture the interest of the next generation when they are young, and then they will always have a place in their hearts for the organ. Orgelkids makes the King of Instruments accessible. What is accessible is then lovable.”)

Learning of the Orgelkids project just a month ago, I’m so excited to have the opportunity to interview the woman responsible for introducing the King of Instruments to young children in such an innovative manner.  So, please tell us what Orgelkids is? And why is this so exciting for the future of the organ?

Ah! But I’m not that woman! That honor and distinction goes to Lydia Vroegindeweij, a self-described amateur organist and former teacher in the Netherlands. She identified a need to engage young children with the wonder that is pipe organs, and she teamed up with retired organ builder, Wim Janssen, to design and build what they call Orgelkids’ do-organ (to distinguish it from a demo-organ). Lydia & Wim appreciated that children want to “do”, not be demonstrated at. So, now, on to what is Orgelkids… Orgelkids is a program to introduce and engage young children with the pipe organ. It consists of a reusable, traveling kit that empowers young children to build a working 2-octave, 2-rank mechanical action pipe organ in under an hour!

The kit comes in a crate. The kids have to sort the keys. They have to sort the pipes. They have to construct the frame, and then assemble all the different components (feeder bellows, reservoir, pallet box, manual and ranks) onto the frame.  The kids have to physically hook the keys up to the pallets. And then they can play! One child pumps the bellows, while one child plays facing into the transparent-faced pallet box, so they can simultaneously tactilely, visually and auditorily experience how an organ produces sound.

Getting back to the earlier idea of “we will love only what we understand”, the Orgelkids kit distills what can be a complex and imposing machine, the pipe organ, down to its basics and lets children experience it by building it. So they gain the understanding, the knowledge. Additionally, knowledge is power! When you build something, you can’t help but leave that experience with a feeling of entitlement and ownership over that thing. We want these young children to feel some entitlement and ownership over pipe organs.

The ideal Orgelkids encounter culminates in a visit to a real, full size instrument, complete with a demonstration and mini-concert and personal invitations to subsequent concerts, thereby feeding that entitlement and ownership.

Orgelkids is going to help people who care about pipe organs, its music, its culture reach the next generation at a younger age and in a very engaging manner.

I’ve read that Orgelkids was first a project of organists in the Netherlands.  How has it made its way to the USA?  Specifically, the Corvallis, Oregon area?

Back in early 2015, Peter, who was 6 at the time, was quite frustrated that we weren’t building pipe organs with him. It wasn’t for lack of trying. Our living room fairly bristles with pipes, old pipes from long gone organs, ranks given to us because of Peter’s interest. Peter’s great-grandmother even gave him a blower for Christmas one year to serve as an air source. But pipes and a fan does not an organ make! Peter had already constructed the closest and only easily-affordable pipe organ kit I had found: a working cardstock model from the UK (it’s actually a reed organ).

So yet another Google search for “pipe organ kit for children” led us to a Dutch video with English subtitles… Orgelkids’ first video. It shows the designer, Wim, demonstrating the construction of his kit. Peter wanted to get his hands on that kit! But only two existed and they were both in Europe. So Peter wrote a letter to Lydia asking if we could work on bringing her concept and program to the States, and if so, would she share her plans with us. Lydia’s blessings and plans quickly arrived, and it was like Christmas as Peter and his brother, Simon, poured over Wim’s hand-drawn plans.

The local AGO chapter in Eugene, Oregon agreed to serve as a Fiscal Sponsor for our initial efforts in raising funds for one organ. But it’s just too good and powerful an idea to just squat on in Oregon.  So our efforts quickly grew to serve as a pilot program for the States, and we’re now an independent nonprofit.

When will the first Orgelkids USA kit be completed and available to groups in the USA?

I expect the first kit will be completed by December. Then we’ll need to design a hardy shipping case to get it around the States. In the Netherlands, they just pile it into a little wooden crate and drive it around their country… that doesn’t scale for us in the U.S.

What is your goal for Orgelkids USA?

In the immediate future (next few years) we’re going to function as a pilot program with outreach at the national level. We want to get our kits out into the hands of the larger AGO Chapters and other organ organizations for them to experience the Orgelkids kit as a powerful outreach tool in their own community. Then they can decide that, yes, they need their own kit. When a group rents the kit, I’m going to emphasize that in addition to hosting their youth programing, such as a “Pedals, Pipes and Pizza” program, they can host an “Pedals, Pipes and Pinot” centered around an Orgelkids encounter for adults doubling as a fundraising event for their AGO Chapter or AGO District to buy and curate their own Orgelkids kit for their area.

So our long-term goals is that, in the future, when there is an established nationwide network of independent kits out there, Orgelkids USA will then function as a resource to support that network, help connect interested groups with the nearest kit, be a source of downloadable curriculum, as well as continue to serve as a resource to our own local community. We’ll also connect potential kit owners with the builders both in Europe and in the States that are building Orgelkids kits. 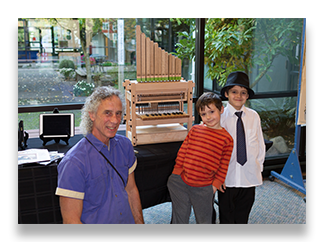 How can one participate in this exciting project?

Thanks for asking! We’ve had an amazing ten months of raising our start-up funds, with major support coming in from AGO Chapters such as New York City, San Francisco & Seattle. We’ve also had fun keeping it traditional (my two boys ran several lemonade stands this summer) as well as quirky (e-busking – more on this later).

We’re just about $500 shy of our $15,000 goal for start-up funds. So if people are inspired to support this project, please do! Every dollar will be put to good use for pipe-organ outreach. We’re a non-profit and donations are tax-deductible. For Oregon residents, Orgelkids USA is a participating Cultural Nonprofit with the Oregon Cultural Trust, so if you match what you donated to Orgelkids USA with a donation to OCT, your donation to OCT comes back to you when you claim your cultural tax credit.

Your readers can make a donation via PayPal with an account or just by using their credit card via links on our web page and Facebook page. Orgelkids supporters may also write a check made out to Orgelkids USA and mail it to 3820 NW Hayes Ave., Corvallis, OR 97330.

Or, if someone is already sold on the idea and has the resources, I am happy to connect them with builders for them to commission their own Orgelkids kit for outreach in their communities!

b.      Hosting an Orgelkids event?
Well, knowing that this resource is on the horizon, start by looking at your current curriculum or outreach programming to identify ways that Orgelkids could enhance what you and your group already offer your community. Reach out to us via our website, and we can brainstorm ideas with you and help you plan an Orgelkids encounter for your group.

Where can one find more information about Orgelkids?

Orgelkids USA has a website www.OrgelkidsUSA.org and we’re also on Facebook www.Facebook.com/OrgelkidsUSA where people can find informative videos (produced in the Netherlands) and the latest news and photos on our project’s progress.

Tell us more about ‘e-busking’… 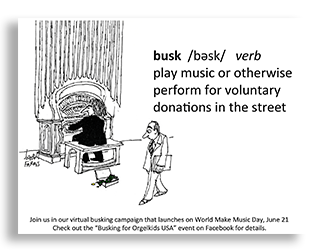 Our e-busking fundraising campaign does bear a bit of explanation. Traditionally, buskers are street performers. But, unless you are an Organ Grinder with your own street organ, organists can’t partake of this time-honored method for raising funds by offering up their talents in the streets. So we took it to online social media and asked our supporters to record a short performance and post it with a call for donations. We had fun. Facebook users can still find and watch all of our buskers by searching #orgelkidsusa. Not on Facebook? You can watch some of our e-busking musicians on YouTube (search orgelkidsusa).

One particular e-busker is worth mentioning… Carolyn Craig is one of AGO’s ‘Rising Stars’, a talented organ student currently studying at Indiana University. She heard about Orgelkids and wanted to help support our efforts, so she took time out of her busy schedule to record for us. So she’s our headliner virtual-busker. Here’s Carolyn Craig’s beautiful contribution for your readers’ enjoyment: https://youtu.be/m4RQduUBiwc