2017 was the year to present a world premiere,
celebrate anniversaries,
honor the past,
and prepare for the future.

friendships were renewed and,
as always we met and were inspired by

many fascinating and creative people across the country.

Last January, yes a full year ago, we began 2017 with the West Coast Introduction of our newest organ and multi-media concert experience, Around the World in 80 Minutes at Nestucca Valley Presbyterian Church in Pacific City, Oregon.  Since we were performing “in our own backyard”, we were hosted and joined by friends and colleagues who have been wonderfully supportive of our work over the years.  The gala concert, also held as a benefit to a local charity, raised substantial funds to help complete Geri’s Community Garden.  Thank you Margaret, Shelley, Colin, and the NVPC community.

In February, thanks to the sponsorship of Rose City Organ Builders of Portland, Oregon, I had the pleasure of presenting an organ workshop to a group of organists eager to enhance their skills.  I find connections made at events like these continue many years.  Thank you Chris for looking to the future.

Since April 2010, month after month, and year after year, First

Methodist Church of Corvallis, Oregon has hosted the Amore Series, a once/month noon-time organ concert series.  Serving as a church outreach effort, "The third Wednesday organ concerts present an opportunity for anyone who wishes to momentarily escape the fast pace of modern life and be transported to another more beautiful and spiritual time and place.”  It was my privilege to present a lecture/recital on early American organists and organs on this well-supported concert series.  Bravo Craig for bringing great organ music to your community for so many years!

April was a tremendously exciting month for us as we returned for our third performance visit to Wooster, Ohio.  It was Nancy Franck, Director of the Music on Market concert series, who said to us eighteen months prior, “when you have a created a third organ and multi-media concert, Music on Market will host the premiere.”  Those were the words that inspired and motivated us to once again get out of our comfortable box and turn on that right brain activity and do the hard work to create something new for our audiences. The result was Around the World in 80 Minutes.  WOW!  How important it is to surround oneself with motivational, think-ahead creative people!  Thank you Nancy! 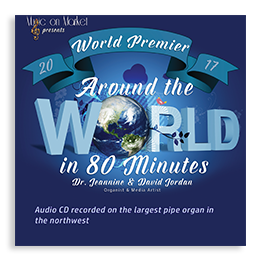 On April 24, 2017, we presented the WORLD PREMIERE of Around the World in 80 Minutes as part of the Fifth Anniversary Season of the Music on Market Series at Wooster United Methodist Church.  What a thrill!  In addition to the performance, we once again enjoyed time with friends from near and far, colleagues (a former student of mine from Iowa), and yes even a Mayflower cousin (the IT person at the church traces his lineage to the same two Mayflower descendants as I do).  Thank you for your support!

On May 11th, we had the privilege of being a part of the celebrations honoring the 40th anniversary of organist Vance Harper Jones and the 200th Anniversary of First Presbyterian Church of New Bern, North Carolina.   As part of the “weekend party” we presented the history of the first 200 years of the organ in the US with a performance of our first organ and multi-media concert experience, From Sea to Shining Sea.  It truly is incredible to actually perform in a place where our early American history actually took place.  Sitting in that colonial church practicing late into the night gave us an opportunity to think of those early colonists sitting in those box pews, worshiping in freedom.  Thank you Pat, Vance, and the really great audience of that “weekend party” celebration.

then a goal and then…realizes both for his congregation.  On May 21st we had the privilege of presenting Around the World in 80 Minutes as part of a fund-raising campaign to complete the four-manual organ at First United Methodist Church in Albany, Oregon.  Once again, we were inspired to be a part of this forward-thinking project to keep the organ as a worship instrument alive and well for generations to come.  Thank you Eric!

In  November, we headed to Melbourne, Florida where I was able to share my love of American organ music with the members of the Space Coast Chapter of the American Guild of Organists in an American Organ Music Workshop.  What a pleasure to share ideas with colleagues.  Thank you Dallas and Lori. 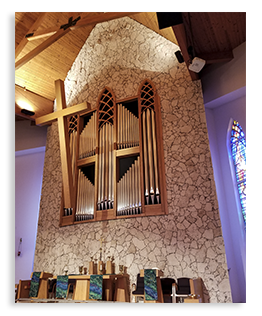 To honor our Veterans and active military personnel, we were invited to perform From Sea to Shining Sea on the Advent Lutheran Concert Series in Melbourne, Florida.  The folks at Advent went above and beyond in providing a stellar concert experience for their audience with an amazing screen and attention to every detail.  Thank you Betty Jo and the volunteers at Advent.

And…last but certainly not least, if you’re still reading this “Christmas Letter”, we also want to thank two very important groups of people in our lives:  the musicians and pastor of our wonderful church, St. Bede Episcopal of Forest Grove, Oregon -- what a blessing it is to serve in music ministry with this group of people.  Thank you Ken and choir.

And, my amazingly gifted and inspirational students.  Yes, you motivate me every day to open a new piece of music, to practice, to think critically, to be a mentor, and to be a caring giving person.  Thank you to all my students!

What does 2018 hold in store?  People to meet, places to explore, performances to present.  We do hope you will join us at one of our many upcoming concerts, student recitals, or even a church service.  We truly do love creating and sharing music!  Our upcoming events are always listed on our newsletters and we also welcome calls or email at any time.

May you be richly blessed in this New Year.